What she wants: Used Toyota Prius or some other hybrid in whatever color we can find. “It’s just a car!”

What we get: Set of new tires, floor mats, and wash and wax for our 10-year-old minivan.

Where he wants to vacation: Road trip to every major league ballpark in the US and Canada to see a game.

What she wants: Two weeks at a beach house with the entire family, including grown-up siblings who refuse to share a bedroom with each other, as they have since they were twelve.

What we get: To watch grandchildren play for three days in backyard kiddie pool while their parents go to a music festival.

What he wants for breakfast: An old-fashioned diner that serves bacon, eggs, sausages, waffles, homefries, “you know, that Lumberjack breakfast.”

What she wants: A vegan, no GMO organic place that would have green smoothies with kale, nutritional yeast, and acai berries.

What we get: Coffee at Starbucks.

What he wants to do for spiritual enlightenment: Lay in the hammock and drink a six pack of beer.

What she wants: Ten days at a Buddhist retreat where you’re not allowed to talk.

What we do: Spend ten days not talking to each other until we agree to go to temple for nephew’s Bar Mitzvah.

What he wants to listen to: Old cassette tapes that he recorded himself of Grateful Dead concerts from the 70s.

What she wants: “Can we just have it be quiet for once!”

What we get: Next door neighbor spends the summer tearing apart and rebuilding his garage, while blasting Rush Limbaugh radio show.

The movie he wants to see: The new superhero outer space police thriller, with several car chases as well as an intergalactic war with alien bank robbers.

What she wants: Something with an intelligent story, preferably involving romance, period costumes and subtitles.

What we get: Channel surfing part of a rerun of Some Like It Hot with Marilyn Monroe, until he falls asleep on the couch.

The candidate he wants: The guy who will try to institute single payer health care, free college, and legalized marijuana.

What she wants: The woman who promises criminal justice reform, free day care, and equal pay for women.

What we get: The guy who promises to build a wall and have Mexico pay for it.

The party he wants to have: Invite everyone we know over for a potluck and a huge bonfire in the backyard. And maybe fireworks.

What she wants: Invite over four carefully selected couples, who don’t yet know each other, but should, for an entirely home-cooked five-course sit-down dinner and a discussion of ways to improve public transportation.

What we get: Son invites over his softball team after their game, and they wind up eating everything in the refrigerator and playing Grand Theft Auto until we throw them out at two a.m.

The exercise he wants: “Let’s get a trial membership at the gym, and run on the treadmill and lift weights.”

What she wants: “It’s a beautiful day, let’s go to the beach for a swim.”

What we get: To walk five miles to the nearest service station and back when the car runs out of gas.

What he wants for their yard: “Isn’t it about time we invested in a riding lawnmower?”

What she wants: “Is this the year you’re finally going to build shelves for all my garden tools?”

What we get: To clean out the compost bin together. 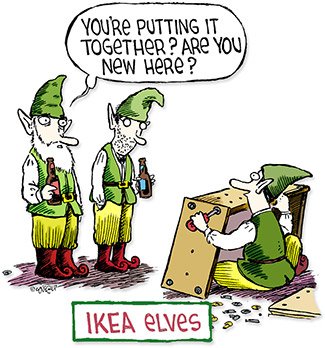 No batteries, no gift wrap, and no assembly required.
Initiate laughter NOW!