I can’t help myself — I’m an honest guy. Like my dad always told me, “If you tell the truth, then you don’t have to try to remember the story you made up when you were drunk.” And the truth is I’ve never been any good at lying. So, for example, I can’t play poker worth a damn, because as soon as I bet, everyone else folds, knowing I must have a great hand or else I wouldn’t be scratching my ear, biting my nails, and rubbing my hands together like Mr. Burns before I start counting out my chips. But sometimes I wish I could lie, or at least learn how to shut up better, because honesty can get you in even more trouble than lying, if you’re not careful.

Yeah, I guess telling my wife that the new dress made her look like she’d just finished her third dessert at an all-you-can-eat buffet was not the comment she was looking for when she asked me how it fit in the back. Or that the color reminded me of that painting we just saw by the artist who swallows paint and then throws up on his canvas. Probably should have just said it was “very colorful and really showed off her curves.”

And when my brother-in-law asked to borrow money (again) and promised to pay it back in a month (not mentioning all the other money he’s never paid back in a month or forever), I shouldn’t have said that I’d rather be pick-pocketed by a gang of criminally trained monkeys, because then at least I’d have an interesting story to tell about why my money was gone and I never expected to get it back again. No, I probably just should have given it to him and asked him to put a dollar on Red 14 for me while he was at the casino blowing it all at the roulette wheel. Because maybe today is my lucky day.

It probably wasn’t nice to tell the new neighbors that their band sounded like a multi-car crash on the freeway and that I am going to call the Animal Protective League the next time I hear them practicing to make sure they aren’t torturing their cats. I should have just asked them to tell me their rehearsal schedule so I could plan to be in another county the next time they jam.

OK, I really wish I hadn’t told my cousin’s wife that I’ve never been with anyone else who talked as much as she did. I did once meet someone who blabbed as non-stop as she, just not as whiny or loud. And I shouldn’t have made that crack about how she should get her hearing checked since she didn’t seem to listen to a word that anyone else had to say. Because she did hear me when I said that, otherwise she wouldn’t have thrown her drink in my face. But at least she did stop talking for five seconds.

It was certainly a mistake to tell my wife’s best friend that her shoes smell like Limburger cheese. I honestly thought that someone had accidentally dropped some cheese in there, or maybe a mouse dragged it into her shoe in the closet and made a little nest, or perhaps her dog had eaten something dead and then chewed on her shoe for a while. I only meant to suggest that she buy a new pair of shoes. How was I to know that Limburger feet is a genetic condition that runs in her family? Or that she’s done years of therapy to try to cope with this condition and that I was the most insensitive person she’d ever met since Jack Bailey stuck a piece of Limburger cheese down her blouse in 5th grade? The truth is I like Limburger cheese; I was only trying to help.

And I’m really sorry I told my daughter that her vegan, gluten-free, goji berry rhubarb pie reminded me a lot of the time I ate sheep’s-brain soup in Yugoslavia, in that I took one bite and afterwards could never imagine taking another, no matter how hard I tried to be polite. I should have just said it was one of the most unique things I’d ever tasted and that I was too full to take another bite, and could I wrap it up and take it home to feed my compost. Err … I mean, to eat later. Well, no — I don’t. That pie definitely deserved to be buried underground. And if you can’t be honest with your own daughter, then what will she have to talk to her lazy, good-for-nothing-but-Sudoku husband about? 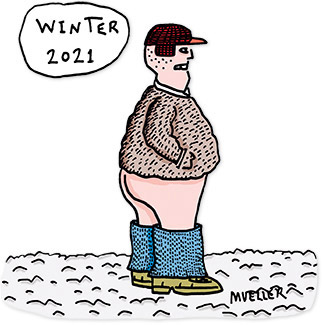