Recently an alliance of businesses and foundations in Cleveland paid over a million dollars to some consultants to come up with a new slogan for our region. After “a disciplined 10-step process,” which included many committee meetings, brand platform development, focus grouping, and expense account travel to various other cities who’ve gone through similar branding searches, the consultants delivered our new name. Cleveland is now Cleveland+. So we can finally get down to marketing the region by changing that C on our ball caps to a C+. “Cleveland: Slightly Above Average!” Or maybe something like, “Cleveland Plus: A Plus-Size City for Plus-Size People!”

The powers that be are embracing this new slogan with as much gusto as they can muster, by plastering plus-size banners on hospitals, office buildings and at the airport, to greet visitors. Another banner at the airport features its own new slogan, based on the baggage tag abbreviation for our city: “CLE: Going Places!” It was better than the alternative idea: “CLE: Let’s Get Out Of Here While We Still Can!”

Clevelanders of the past couple of generations have grown up with an inferiority complex, and ongoing dread about our future. We’ve gone from ranking as the 7th largest city in the U.S. in 1950 to 40th last year. During that span, the population of the city has fallen by half. Lately, things have only gotten worse. Since George W. has been running the show in Washington, Ohio lost about 250,000 manufacturing jobs. Not surprisingly, we’re also at the epicenter of the home foreclosure crisis.

This latest crisis has had some positive effects. There are apparently many fewer homeless people sleeping on Cleveland city streets this winter. Instead, they have taken to living in some of the 15,000 homes that are currently vacant due to foreclosure. The downside is that organized gangs of men are breaking into vacant houses and stripping them of their copper wiring and pipes. There is a growing world demand for copper, mostly coming as the result of the manufacturing boom in China. So it has become profitable for some of the multitude of laid-off workers here to strip out the few salvageable parts of their grandparents’ and parents’ legacies of solidly built homes, and sell them for scrap. This enables Chinese workers to manufacture video game systems, iPods, and other electronic gizmos to keep us occupied until all our money (and copper plumbing) runs out. In the same way that we used to put signs on our cars that said “No Radio” to stave off thieves who would break the windows just to get at the car stereo, vacant Cleveland homes now carry signs saying, “No Copper. All PVC Pipes,” in an attempt to stave off looters.

Cleveland has already had its fair share of image problems. We’re the home of the Cuyahoga River, which was so polluted in the 1970s that it caught on fire. That disaster was compounded in the national consciousness when our mayor at the time, Ralph Perk, managed to set his hair on fire while attempting to cut a ribbon with a welding torch for a photo op. Perk’s wife, Lucille, gained national renown when she rejected a dinner invitation from the White House so she wouldn’t miss her regular bowling night. We’re used to being referred to as “The Mistake on the Lake” and to seeing many of our brightest stars leave us behind for better offers somewhere else.

But despite it all, Cleveland remains a great place to live, and those of us who love it here still think of it as “The Best Location in the Nation,” the city’s slogan back in the good old days of the 50s and early 60s. There is much reason for optimism about our future. For example, local athlete LeBron James has become the best basketball player in the world and practically single-handedly carried our team to the championship series last year. (But does the team have to play in the Quickie Loans Arena?)

More importantly, our strong history of innovation in technology and manufacturing offers us great opportunities to remake our city as a leader in the green revolution of the 21st century. Recently, one of the leading environmental organizations here, EcoCity Cleveland, merged with our wonderful Museum of Natural History to create a center for regional sustainability called GreenCity-BlueLake Institute. The museum plans to totally remake itself to showcase the evolutionary history of the planet from the Big Bang 14 billion years ago to the climate change event that is currently taking place. This will make a nice contrast to the recently opened Creation Museum near the opposite end of Ohio, where the dinosaurs roam the Garden of Eden.

Cleveland offers tremendous potential for future development. We sit astride the largest body of fresh water on the planet. We have more wind than the Windy City. We already have most of the infrastructure in place to handle twice as many people as currently live here, and if you’re looking for a house at a bargain basement price, now’s the time to buy. But do make sure you check the plumbing first.

So who needs a name that branding consultants swoon over, like they have in Las Vegas (What Happens Here, Stays Here) or Walla Walla, Washington (The City So Nice, They Named It Twice).

We’re working on the vision of becoming a Green City on a Blue Lake, but in the meantime, we’re already the birthplace of Rock and Roll, as well as home to its Hall of Fame.

Cleveland Gets a C+ was last modified: October 18th, 2013 by Ray Lesser 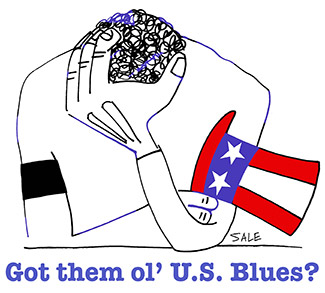